Par Tot Parata - The Bolognese Parade For Children, Young People And Their Adults

Almost every year since 2015, a new animal has risen in the city of Bologna, Italy during spring. This animal is created by volunteer spirits and creative souls. The event we are referring to is the Par Tot Parata, a Bolognese cultural parade for children, young people and their adults, which each year has a new theme animal – a spirit creature.

Par Tot Parata gathers children and adults in Bologna in “laboratories” of creative activities and workshops with the aim of creating props, costumes and scenography for the parade – all inspired by the animal of the year. So far, the theme animals have been the wolf, the monkey, the camel and the whale.
One of the missions of the parade is to support children and young people’s social well-being as well as creating spaces of creative and relational well-being for boys and girls in Bologna. Especially after the last years public lock-down due to the COVID-19 pandemic.

The organizer of the Par Tot Parata is the Bolognese cultural institution Associazione Oltre in collaboration with other cultural, social and educational local realities. Based on previous years success the parade will once again be held in May 2022 centered around this year’s spirit animal: the donkey. As a new thing this year, the European Commission’s project CultureForHealth will be attending the parade as part of a study trip. Here practitioners of arts and health, politicians and policy-makers will have the possibility to find inspiration from the parade and from additional roundtable talks and capacity building workshops in order to make new policy recommendations on the subject of how to use culture for the social well-being of children and young people. 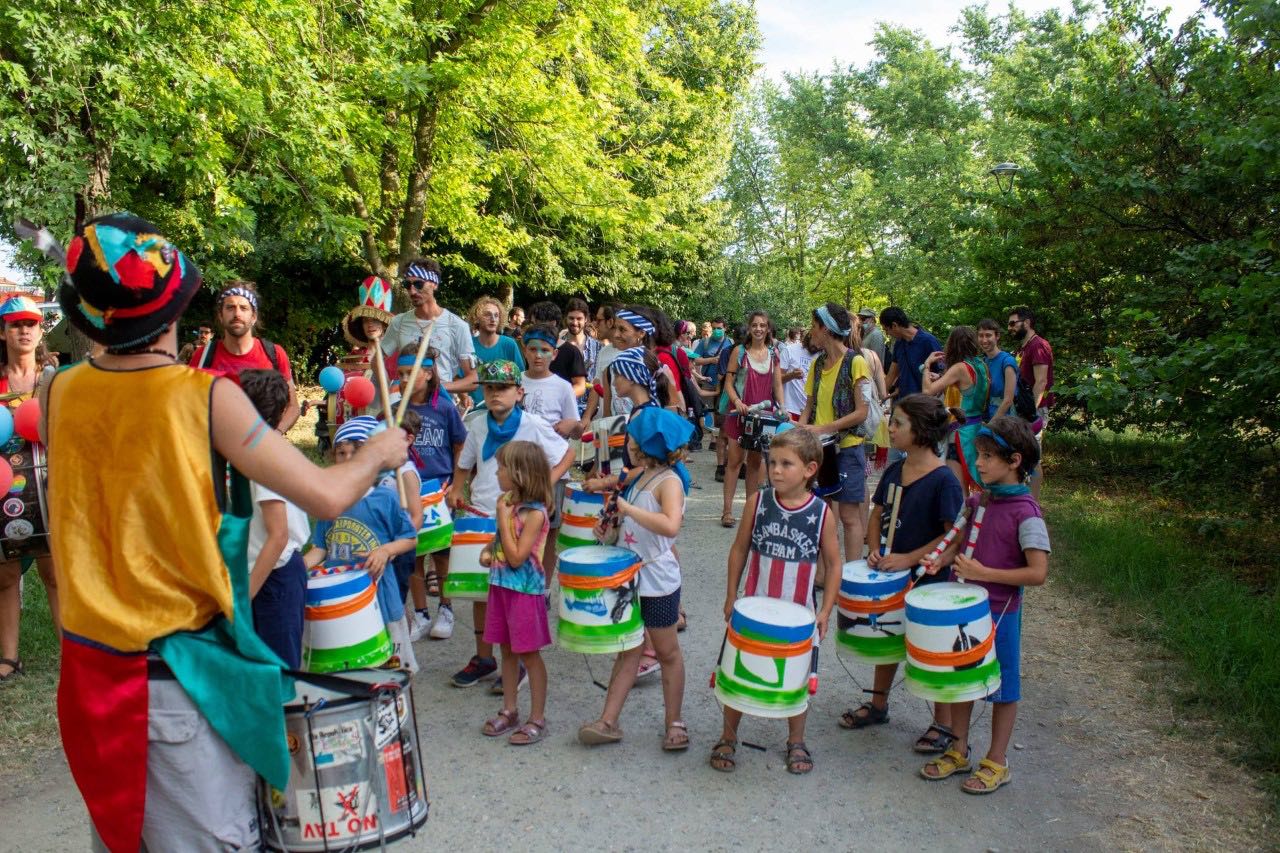 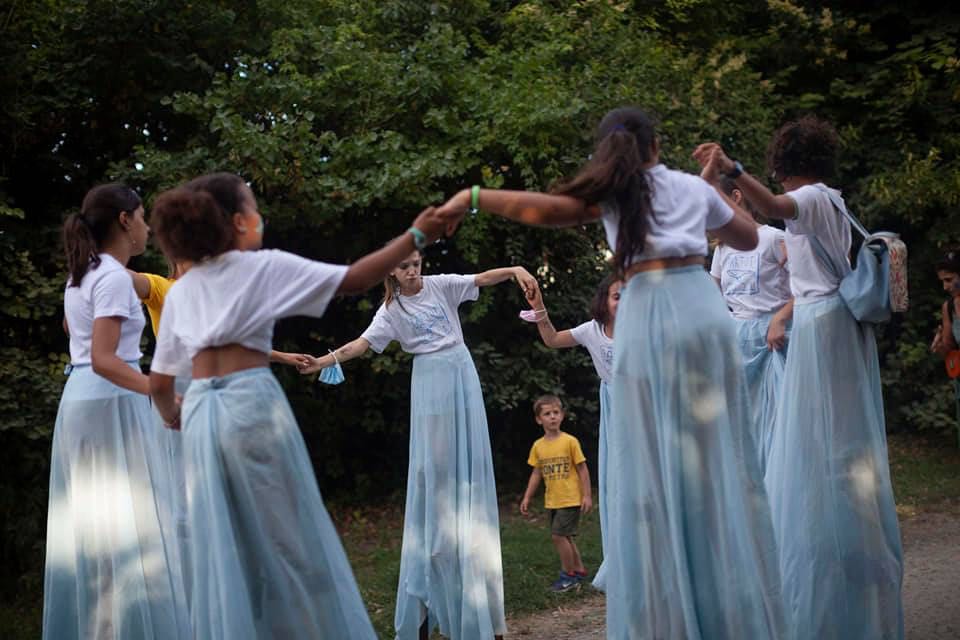 The History Of Associazione Oltre And Par Tot Parata

Associazione Oltre has been active in Bologna for more than twenty years. Through the years they have been organizing participation projects in which performing arts and other cultural activities has mingled with the active engagement of local communities, in their very own, as Associazione Oltre puts it, “unique, punkish and ‘do it yourself’ kind of way!”

During one edition of Associazione Oltre’s FestFestival – their old festival dedicated to multicultural activities – they organized a parade to celebrate the opening of the festival. From year to year the parade became more and more participated, becoming a stand-alone project called Par Tot Parata. In the local Bolognese dialect “Par Tot” means “for everyone”.

Click *HERE* to visit Par Tot Parata’s old Facebook page, where you can get inspired by a lot of old pictures from the parades.

The Par Tot Parata became a popular event in Bologna. So popular that the parades of 2011 and 2013 were attended by more than 10.000 people. The popularity of the parades was of course a joyful thing, but it was also difficult to manage them without strong support from the local administration. So difficult, that the Par Tot Parata was put on hold.

In 2015, a new idea was born to re-think the parade: organizing it in a smaller scale dedicated to the younger audiences of Bologna. Hence the Par Tot Parata for children, young people and their adults had emerged!
Since that year, almost every year a parade has been carried out, changing its “spirit animal” to guide each year’s different edition and theme.

Click *HERE* to see a quick video-report on the first addition of the parade in 2015, where the spirit animal was the wolf. 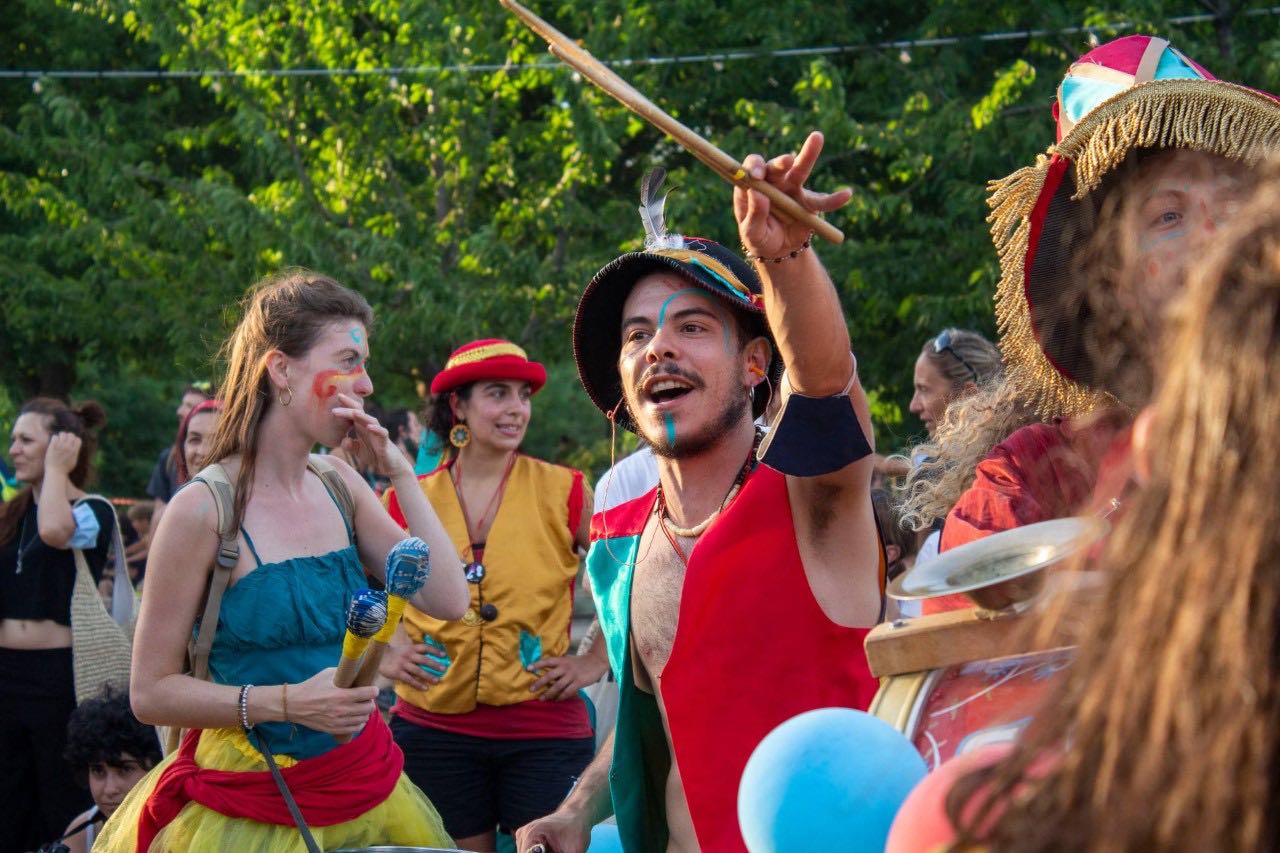 The Different Spirit Animals Throughout The Years

The spirit animals have, as mentioned above, laid the foundation for the Par Tot Parata since 2015. Each animal has been the center of cultural activities and workshops, where props, costumes and scenopgraphies for the different parades over the years have been made with inspiration from the spirit animals. All this with the aim of bringing together children and adults for the sake of using culture to support children’s social and relational well-being.
Below you will find a short walkthrough of the spirit animals throughout the years.

In 2015, at the first edition of the Par Tot Parata children’s parade, the howling wolfs found their ways into the streets of Bologna. Creative props, costumes and scenographies were made with inspiration from this great creature of the night, which has been subject to many people’s myths and legends around the world. 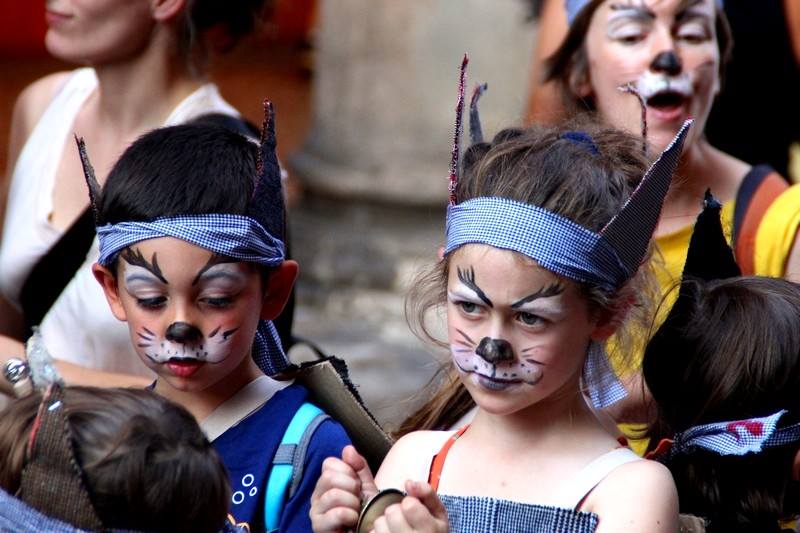 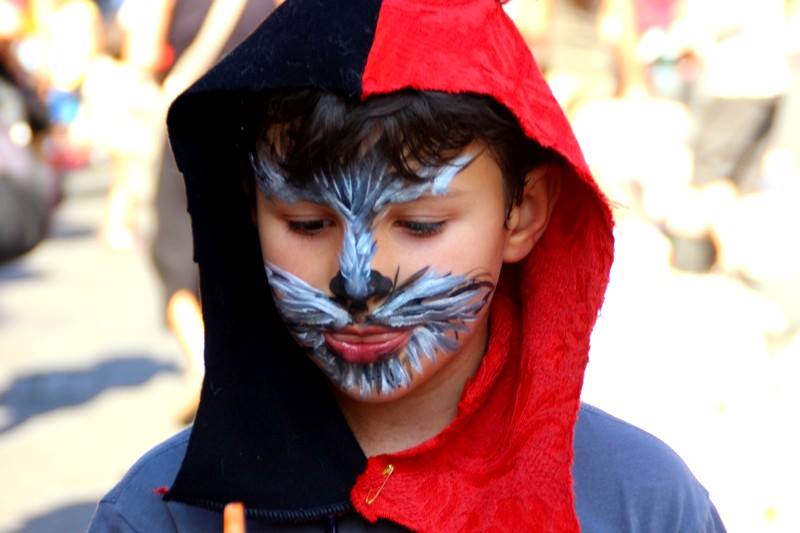 In 2016, at the second edition of the Par Tot Parata, playful monkeys were swinging their way into the urban jungle of Bologna. With them they brought the imagery of man and the deep jungle into the city center. The monkey as the parade’s spirit animal was requested by the participating children of the 2015 parade. 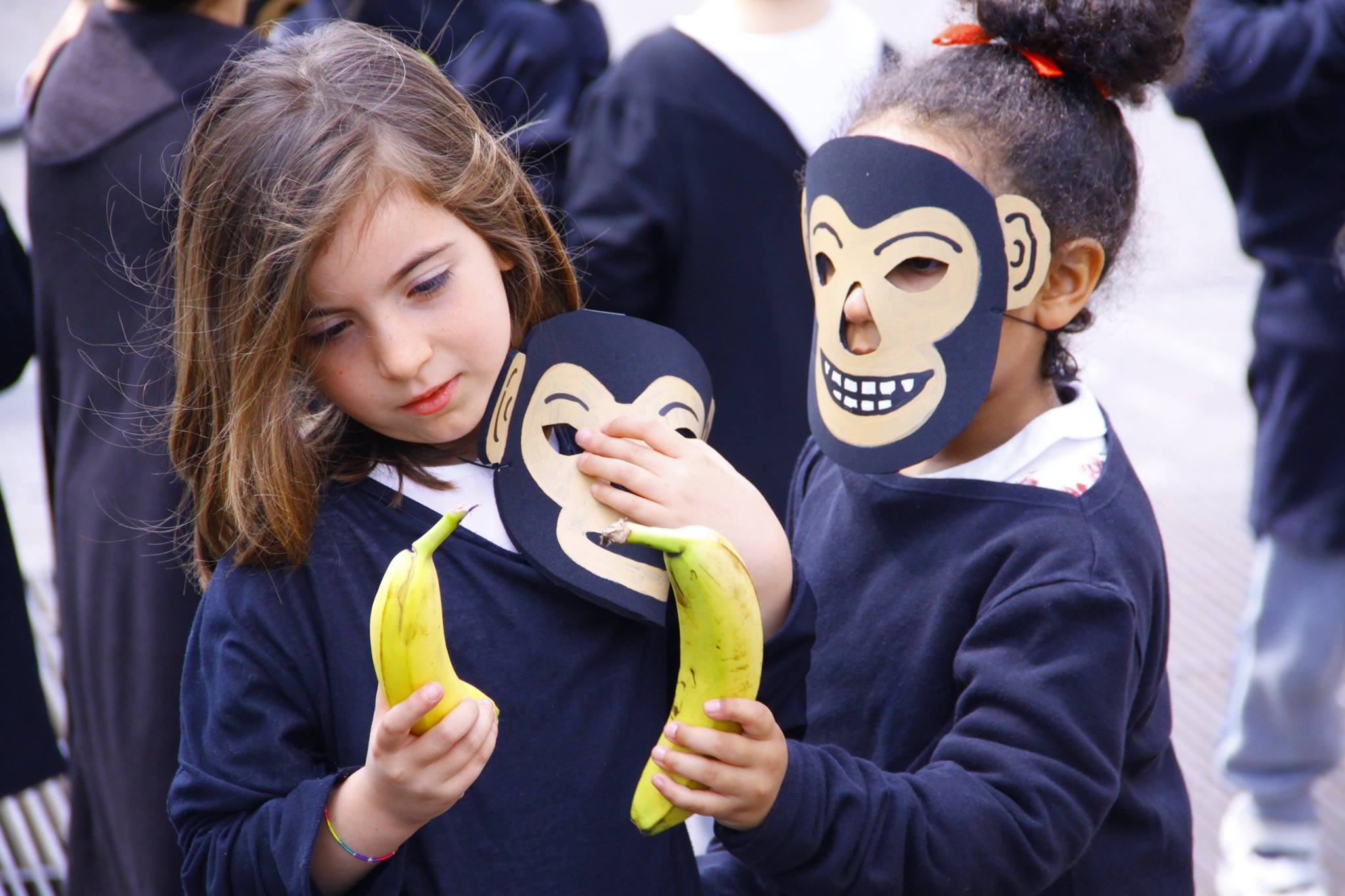 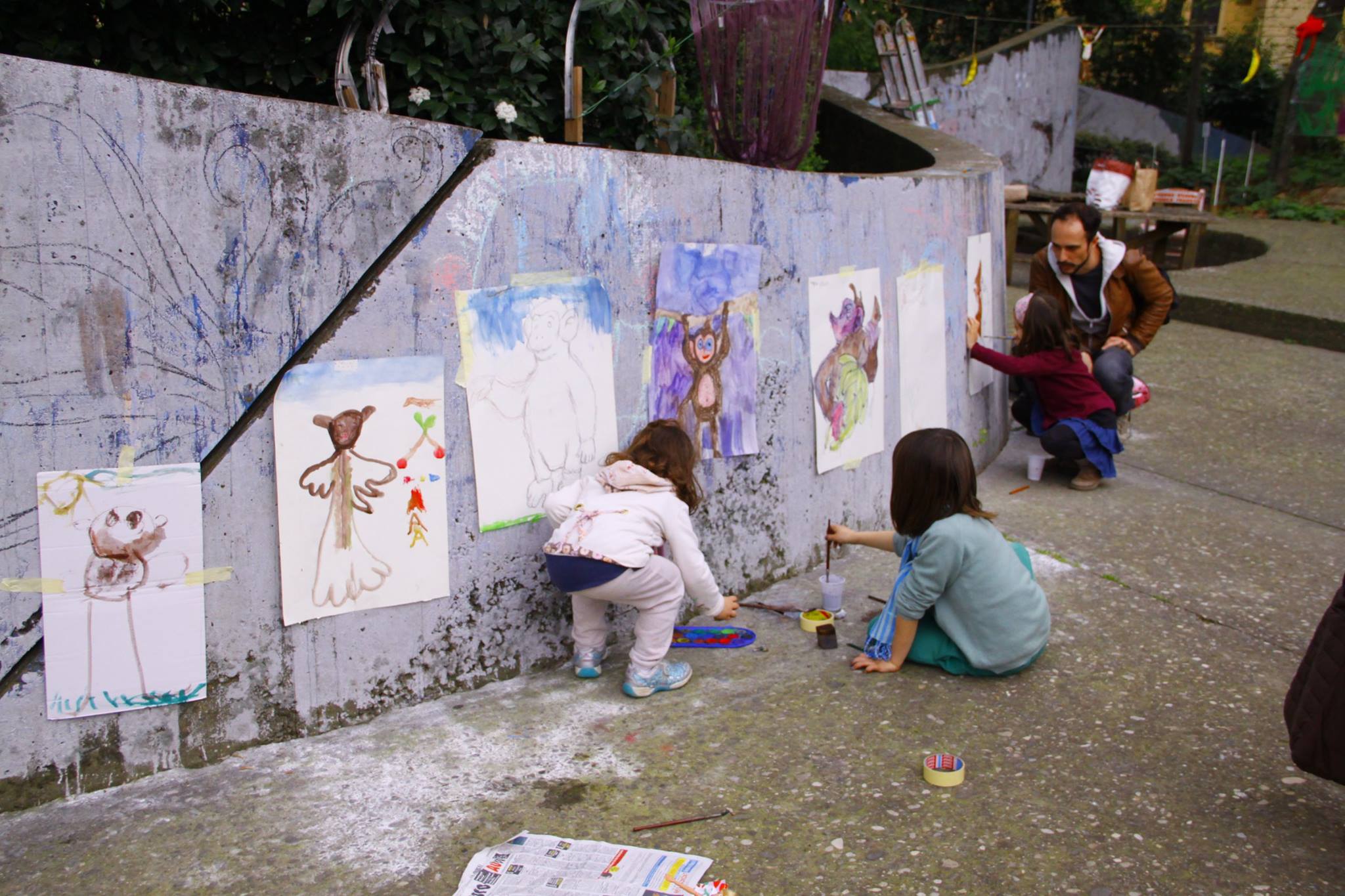 In 2018, after a year of absence, the third edition of the Par Tot Parata children’s parade was riding back into the city of Bologna. This time on the back of the year's spirit animal, the camel, bringing the hot and sandy dessert into the street of the old Italian city and turning its parks into green oases. 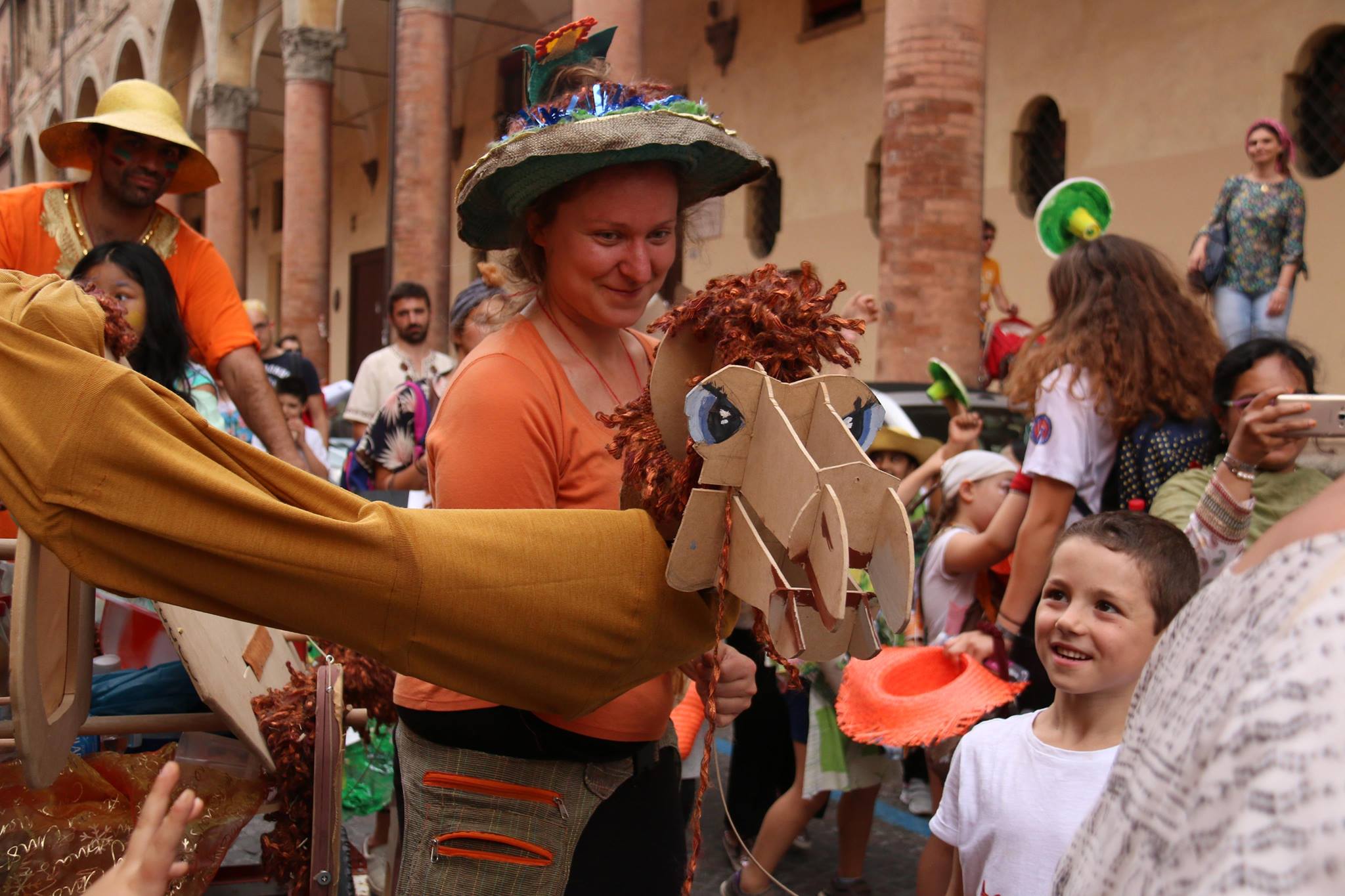 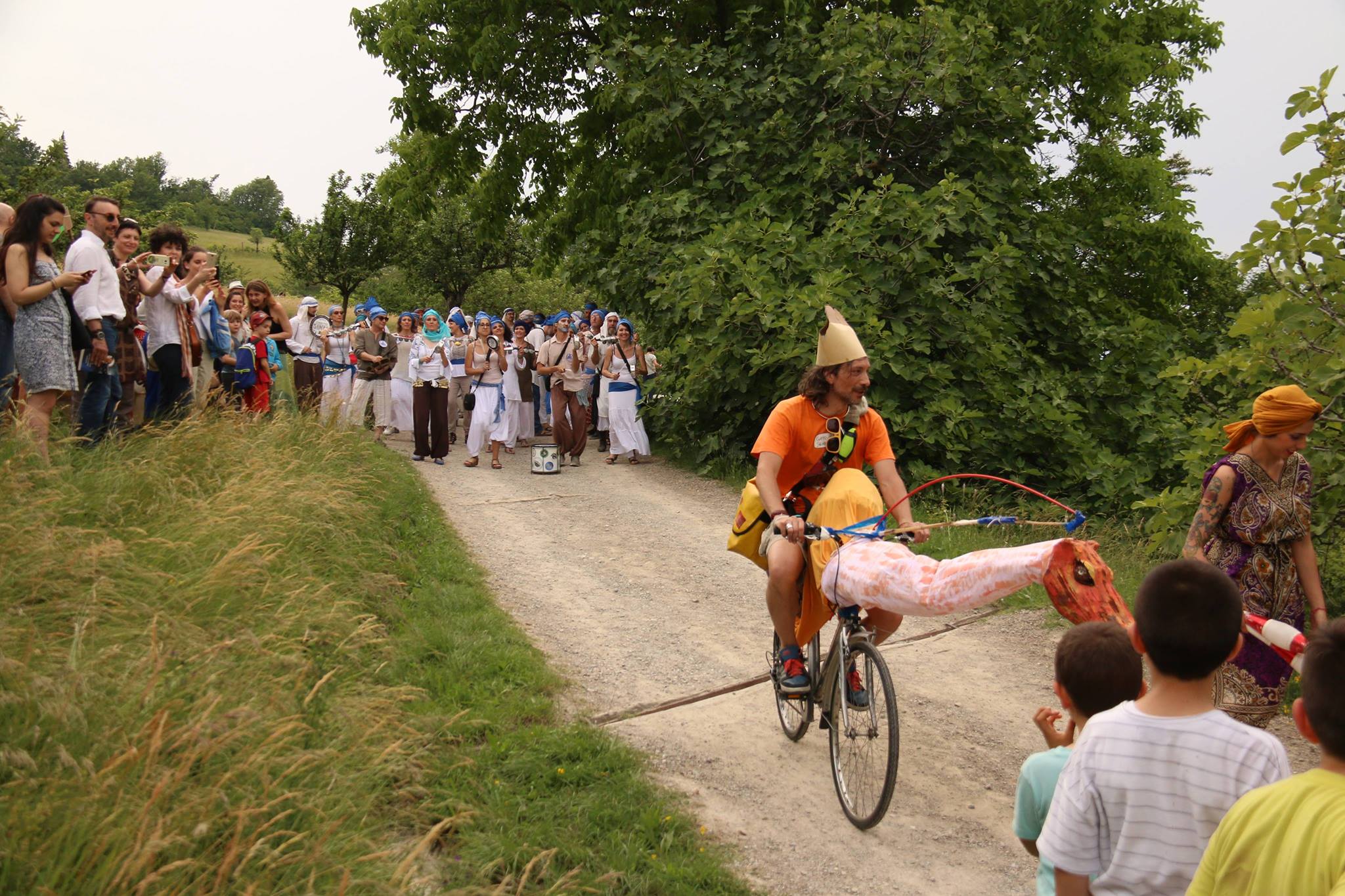 In 2021, the Par Tot Parata children’s parade resurfaced in its fourth edition. The mighty whale became the spirit animal for this year’s parade. The symbol of the whale was clear: It should illustrate the need to resurface after a year of public lock down due to the COVID-19 pandemic just like the whale resurfaces after being under water for a while. 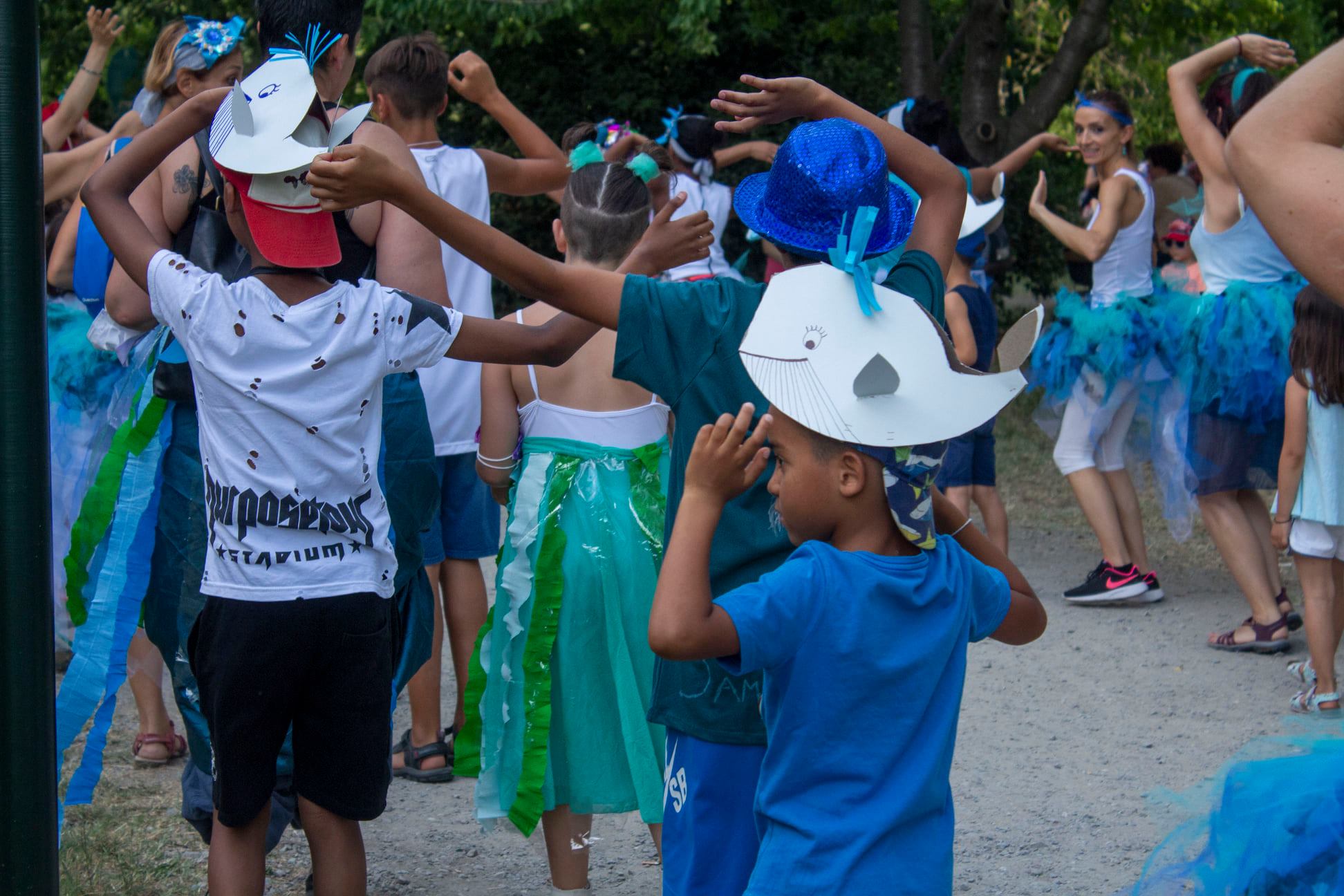 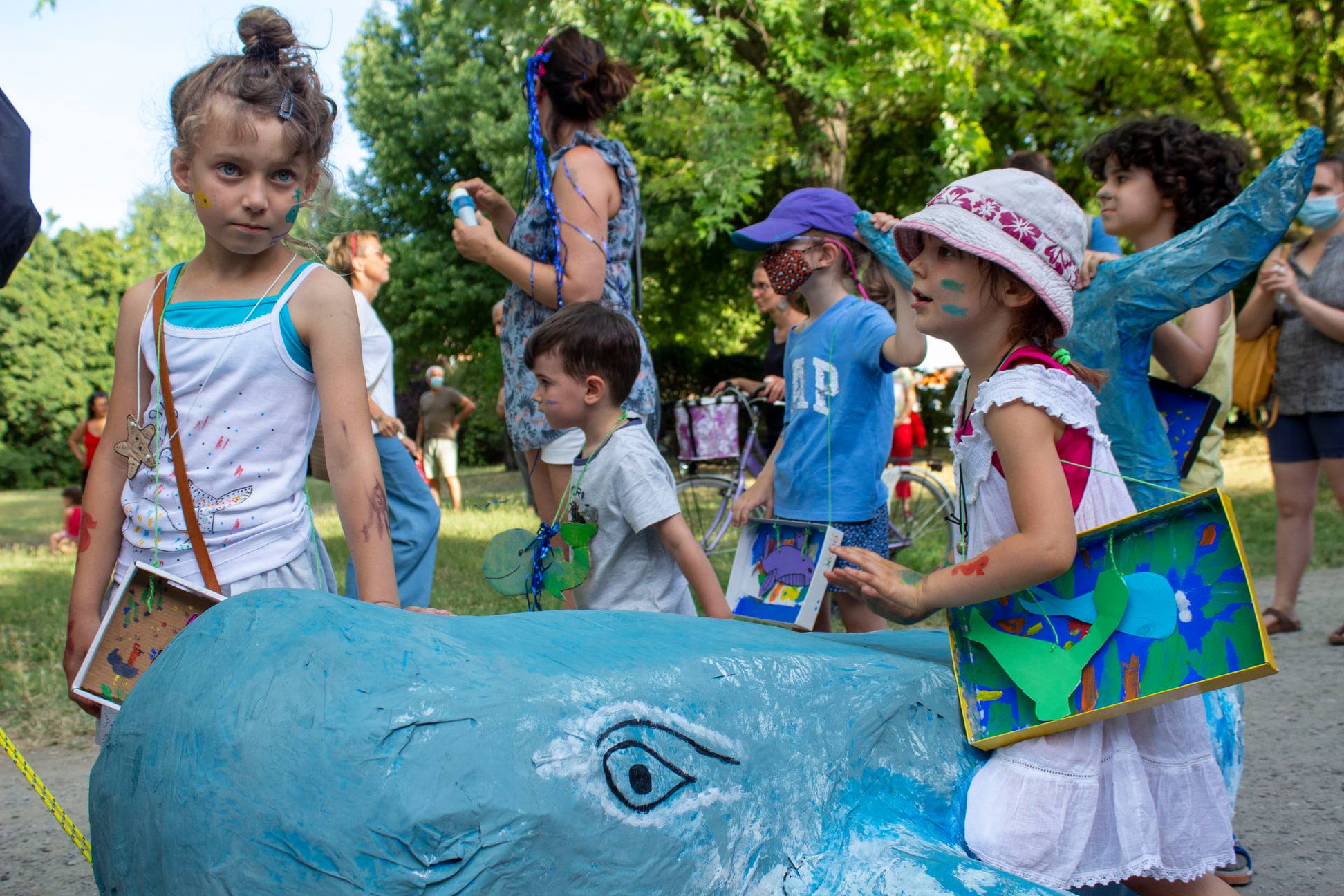 In 2022, the fifth edition of the Par Tot Parata children’s parade will be dedicated to the donkey as the spirit animal. The donkey is a symbol of wisdom and hard work and will be the inspiration for the 2022 parade’s props, costumes and scenography.

For more information about the 2022 Par Tot Parata parade for children, young people and their adults, please visit their Facebook page *HERE* 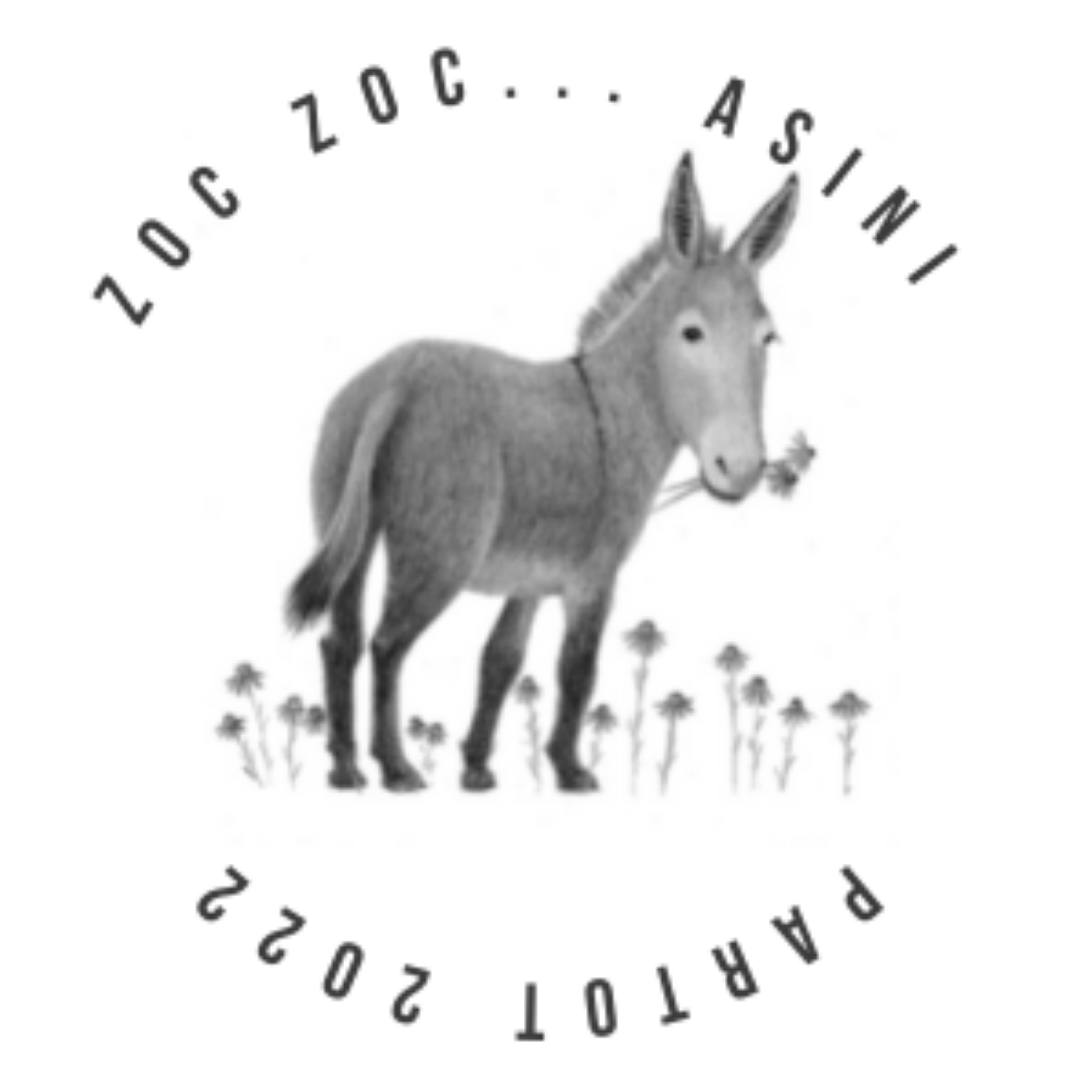 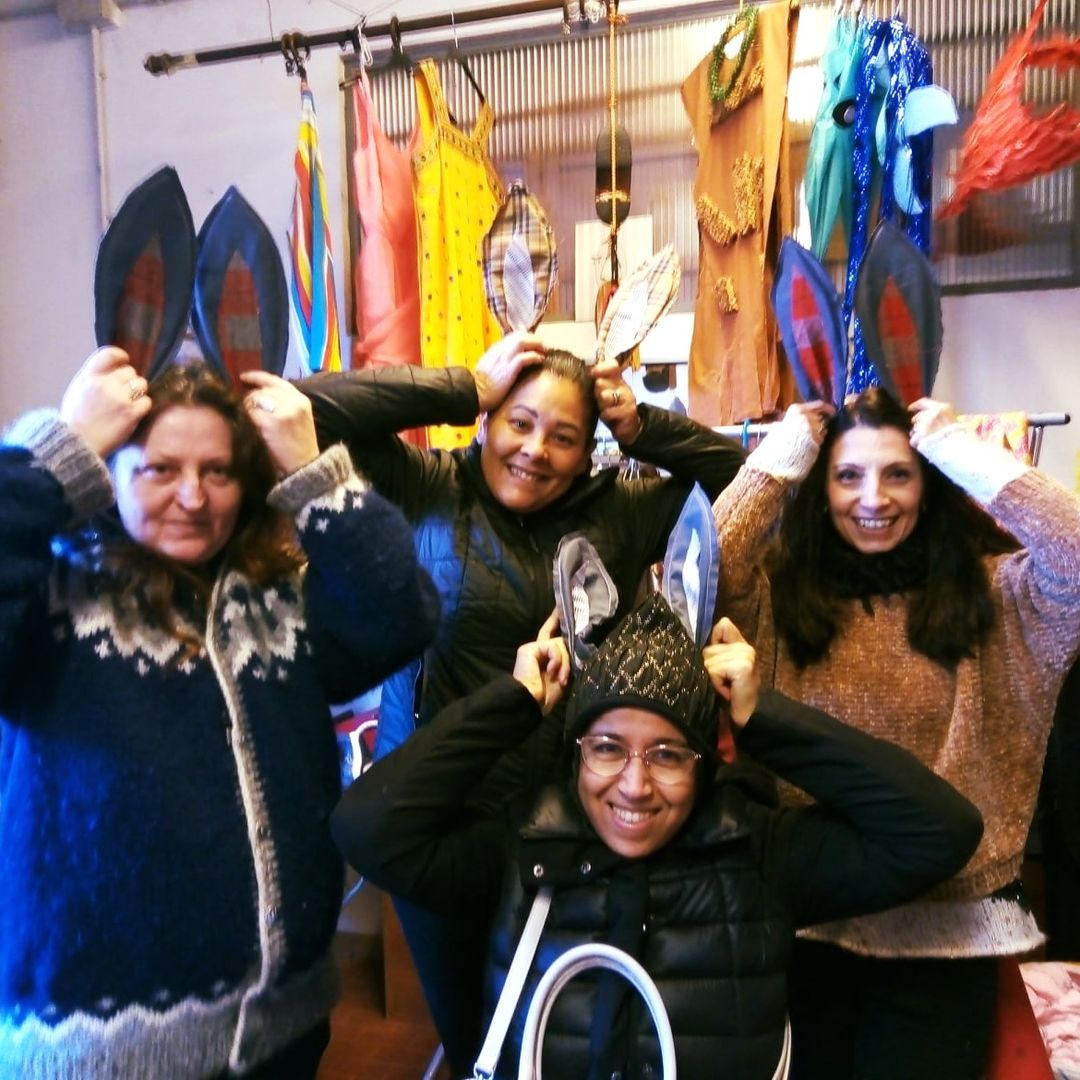 Stay tuned on CultureForHealth’s website or CultureForHealth’s social media accounts to be updated on the preliminary policy recommendations on the subject of culture and the social and relational well-being of children and young people emerging from the workshops and round table discussion at this year’s Par Tot Parata in Bologna. 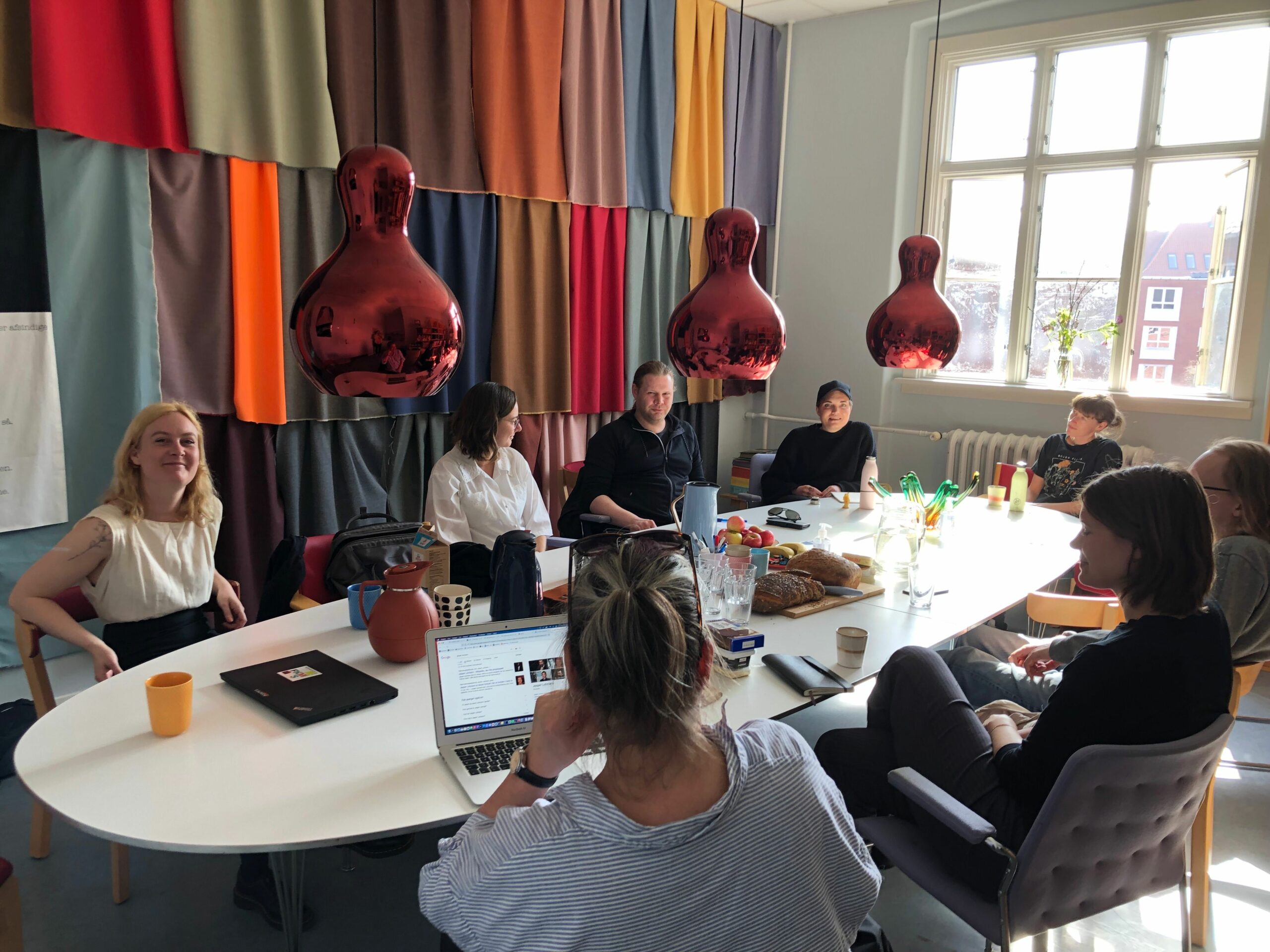 Inspiration | writing
REWRITALIZE: Uniting Arts And Health Through Writing. How does one unite the two very different worlds of arts and health without compromising neither of...
Read more 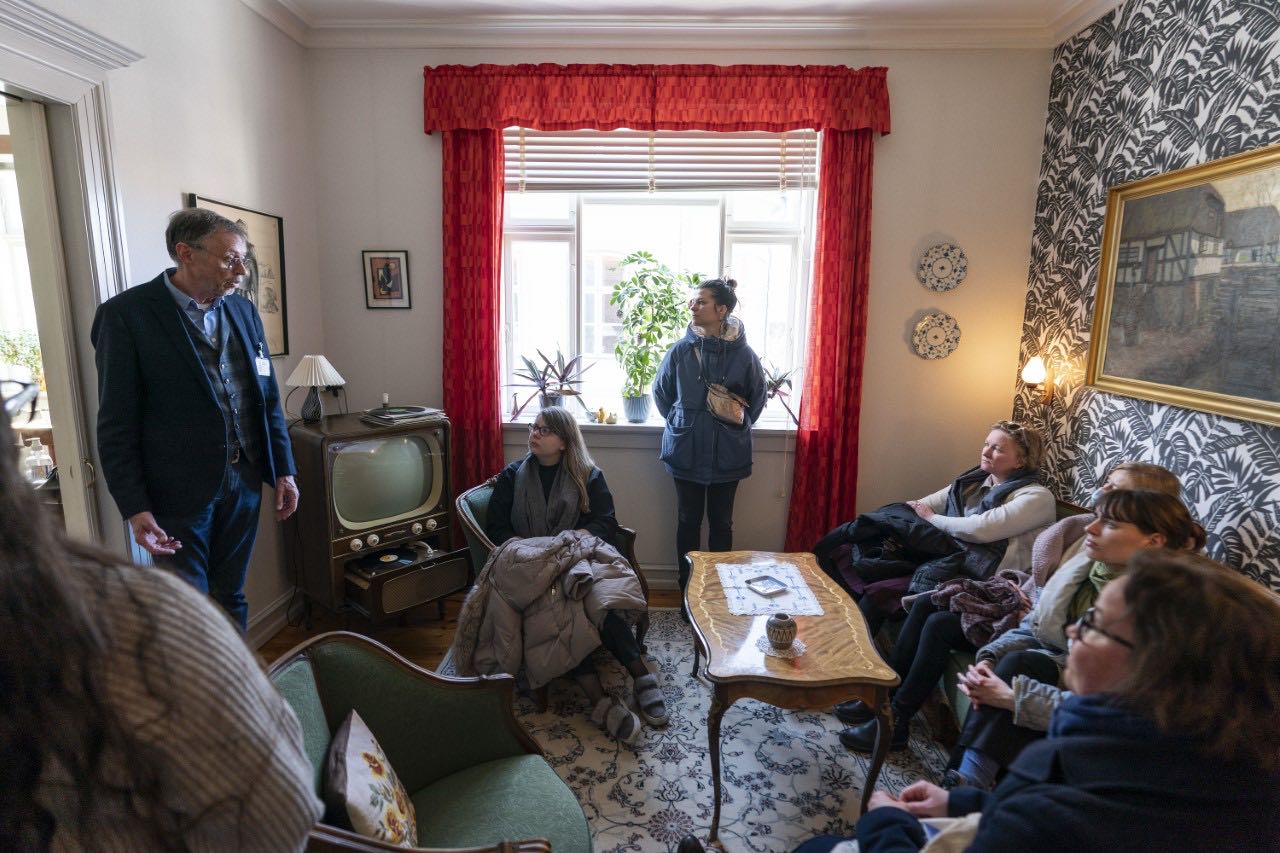 Inspiration | museums
Traveling Back In Time With Dementia: How Old-Time Apartments Can Improve The Well-Being Of People With Dementia. This inspiration case investigates how the Danish open-air museum Den Gamle By, works with the impro...
Read more